A familiar face returns: Gail Johnsson Tabtim will be interning with us again, this time within the 'Drawing the City' project.


Gail will be helping us out on our Motorola Mobility - Mobile Life study on people's perceptions of their cities. Gail will be following up on our study in Chicago, and will be collecting hand-drawn maps from Stockholmers.

Posted by Henriette No comments:

If you happen to be around Hong Kong in time for the SIGGRAPH Asia 2011 conference, come by and join us in an exciting panel about the past, current and future visions of research within the Mobile2.0 project! The panel, entitled Mobile2.0 - The Future of Apps: Mashing It Up and Getting It Out There, will bring up some of the key research areas that have been covered within the time span of the Mobile2.0 project. The panel will touch upon the design and distribution of mobile services and applications within the past, current and future mobile market. We will discuss the delights of having worked with novel mobile service concepts in an era before the mobile app markets and how the current mobile markets change the way research is done today. The possibilities we find with changes to the mobile ecosystem over the past 5-10 years and the challenges this brings for a new era of services and service values to come in the future. Both from the perspective of the actors within the mobile ecosystem, but also from the perspective of the consumers in use of these services.

Hope to see you there!

Posted by Zeynep No comments: 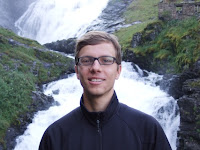 Matthias Korn, a PhD-student of Aarhus University's Computer Mediated Activity Group in Denmark is our new visitor. Matthias is working with us within Mobile 2.0's location-based services theme.

Matthias' work focuses on the cross roads of citizen participation and mobile ubiquitous technology, and studies how location and 'being there' may support citizens in deliberation activities such as participatory planning. His research explores how mobile location-based services interweave physical and digital spaces and, specifically, how people make and experience the link between the two. Matthias' research ties into our work on location-sharing quite nicely, and it's great having him around.
Posted by Henriette No comments:

One of the human-robot interaction concepts explored within the LIREC project is the concept of migrating agents; agents that move from embodiment to embodiment, allowing to pick whichever physical form fits the robot's task and user's context best. If the migrating agent needs to be perceived as one single character, balancing consistency of its behavior with the advantages of switching embodiments is crucial.

In collaboration with INESC-ID in Portugal, Elena Márquez Segura explored user reactions to migration, focusing on this balance. Elena spent about three weeks in Portugal, and together with INESC-ID's Paulo Gomes, studied children's reactions to the robot dinosaur Pleo, moving from its regular physical form, to a virtual character in a mobile app, and vice versa. Implementation and perceptions of the 'migration moment' itself play a large role in how children experience the move, and their interaction with the agent.

Finally a public note on some very big news! From January 1, Lars Erik Holmquist is moving to sunny California to set up a group at Yahoo! Labs in Santa Clara. Lots of luck - we're expecting lots of surfin' and sunscreen in your future!

In the mean time, Henriette Cramer has taken over as project leader for both Future App Labs projects, Lirec and Mobile 2.0, so direct any questions about the project and collaborations her way.
Posted by Henriette No comments: 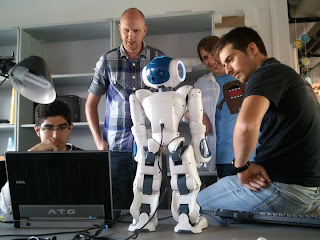 He's been here for a while now, so it's time for an announcement: Miguel Pais is our new master student!

Miguel (on the left, hidden behind his laptop) is working with Nao, the robot, within the Lirec project. Together with our project partners at INESD-ID in Portugal Miguel will be exploring how robots' social cues can mediate people's interactions with each other.
Posted by Henriette No comments:

Columbus is a mobile application that lets users explore their surroundings through geotagged photographs, presented to them at the location they were taken. By moving around the physical world, the user unlocks photographs and gets to see and experience them in unison with their location. During two consecutive field trials, we investigated how the application was used and experienced and how photographs and locations are explored together. We found that previous experience with the surroundings people was exploring affected how they experienced the localized content. We report on the system’s design and implementation, the trials as well as resulting insights that can be used by other developers of locative media applications.
Posted by Mattias Rost No comments: